Rentalcars.com is a car rental agency that allows a user to book a hire car from numerous partner branches located throughout the world. The branches are primarily located near airports and this is where users generally pick up and drop off their hire cars.

There are occasions, when a user would search to pick up the car from non-airport locations, such as a city e.g. London, Manchester, etc. On these occasions, the user would mostly type a city name as their pick up point. This caused a problem for both the user and the client as RentalCars were not able to present the most relevant search results, as they did not know exactly where in the city the user wanted to pick up the car from. There was a hypothesis from the business that this was the reason conversion rates were significantly lower than ‘airport’ searching users.

I was to deliver a UX change to the main car search component, in order to encourage the user to enter a precise pickup location when performing a “non-airport search”. These were the specific goals:

To kick start the ideation process, I performed a non-airport search on the main competitors’ sites and took relevant screenshots from each site.

I compiled the competitor research list, along with some of my own ideas, into a shortlist of potential approaches and wrote each approach onto a post-it notes and stuck them on the wall in a discovery meeting with stakeholders and developers.

I did this to give the ideas visibility and to encourage discussion on the most suitable solution(s) in the meetings.

After distilling the customer research and shortlisting some approaches, I created low-fidelity wireframes in order to iterate through design options quickly.

I held a brief meeting with the product owner and developer to present the low-fidelity wireframes which I used as a starting point to discuss the most suitable option to solve the problem.

Following a review of the wireframes, it was agreed that we go with the following solution:

*Display a secondary search input text field (only for users in this type of search funnel), below the primary search field, called ‘ tailor pick up point’ which would only display when the user entered a non-airport pick up location.

*This field would then allow the user to perform an auto-completed search term which contains major landmarks, districts and buildings (such as train stations) in order for them to provide their exact pick up point.

We chose this solution to take to design and prototype for the reasons:

Following agreement on which approach to take, I designed high fidelity screen mockups with two variations on the style of the new search field.

In the first variation, I added a blue border and step tab around a new secondary search field called “tailor pick up point”. The purpose of this was to visually draw the users’ eyes to the field to encourage them to complete it. Although the field was not mandatory, a project goal was to encourage interaction with this field and obtain accurate pick up location data. 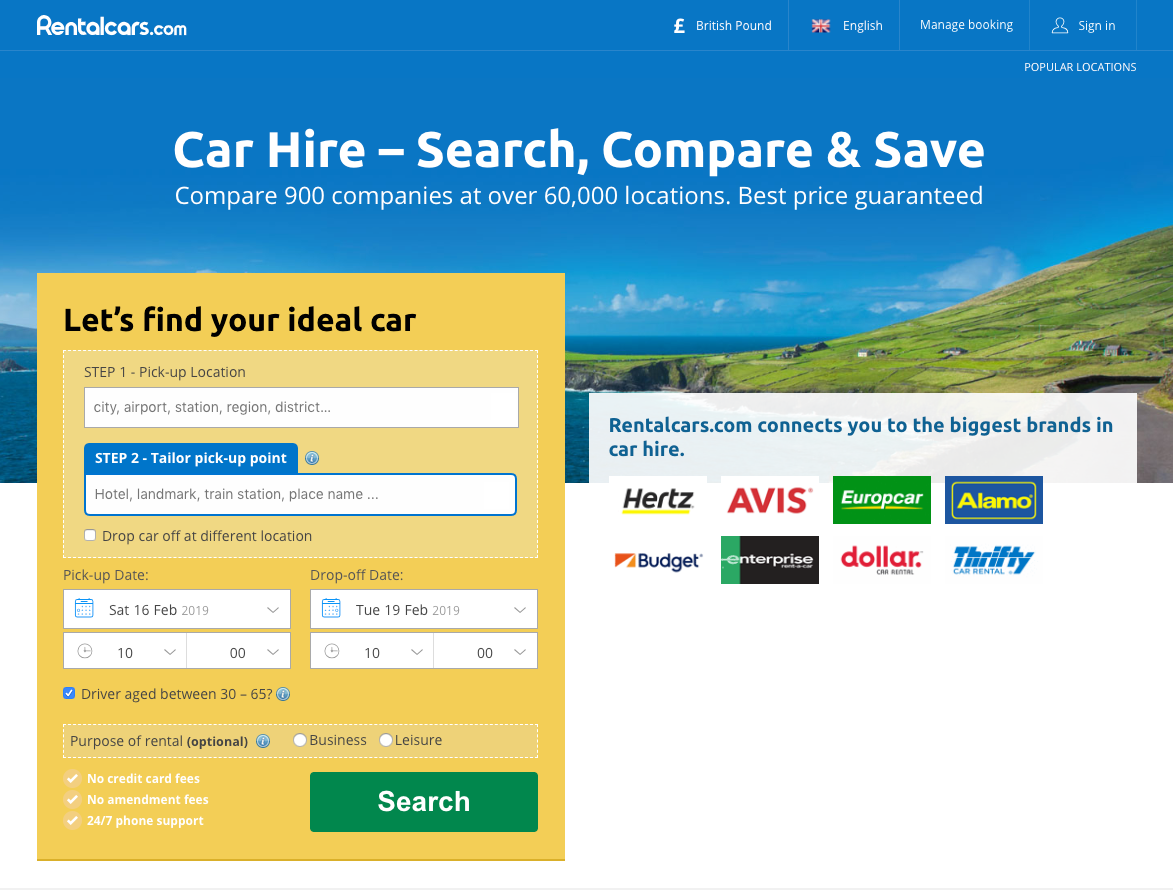 The second variation featured the secondary field in a more a subtle way that mirrored the design pattern of the existing search field. 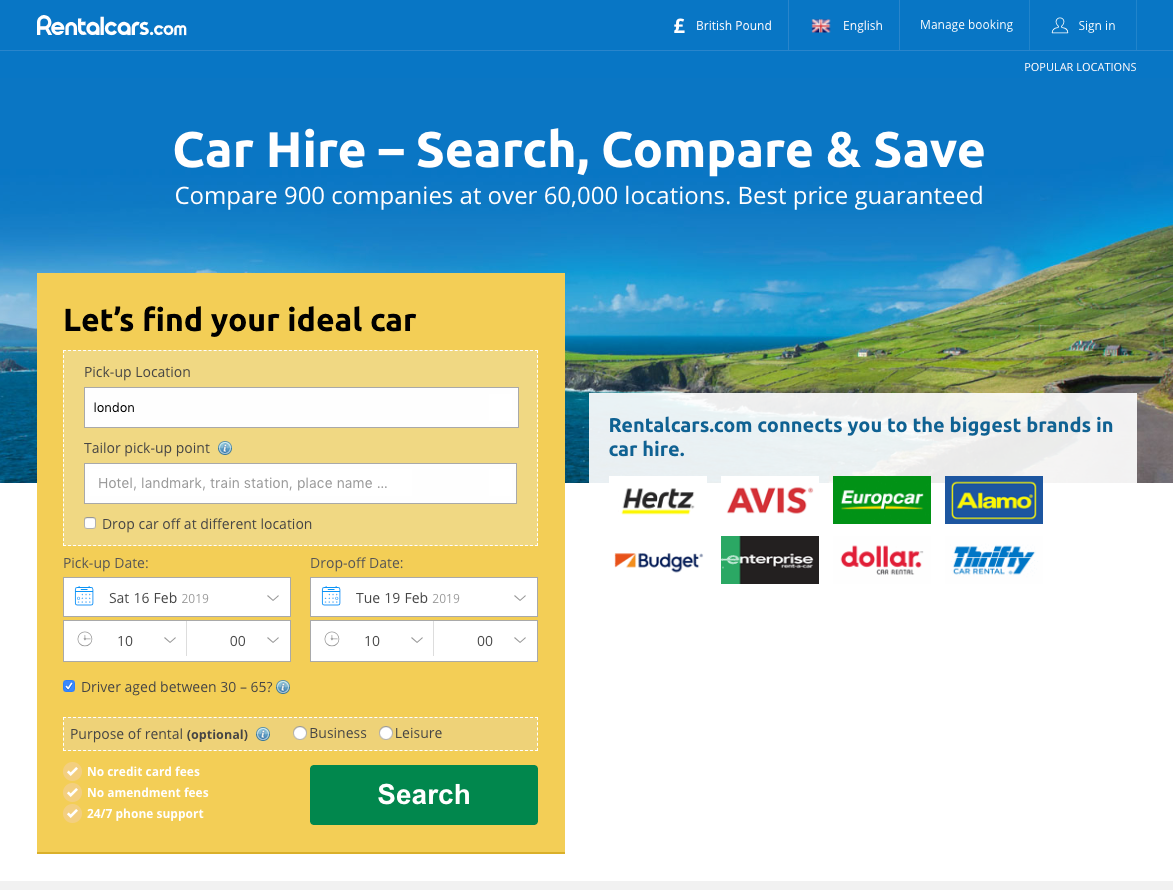 I visually grouped both the search fields (on both solutions) with an existing dotted border style which was already present on the page too. This was to ensure design consistency and not put an additional cognitive load on the user.

I had to glean insights in order to validate (or not) that the proposed solution would achieve the project goal and that users would understand how to use the interface. To achieve this, I set up a user testing session using the ‘What users do’ online platform and setup two distict user groups, each with a seperate car pick up point.

I created these two groups as I wanted to gain insights into how users in Group B would behave when they only know the name of the city as a pick up point. If a user has zero local knowledge of a city, how would they know where exactly to pick up the car? What would they do?

I ran the test on fifty test subjects, three of which adopted the persona ‘A’ group, and the other three personas ‘B’.

[Example of prototype in action]

Included here is a link to the basic clickable prototype based on Solution 1 above which is the the design with the blue border and tab around the secondary search input field.

The following was a selection of the feedback received from the user testing sessions: 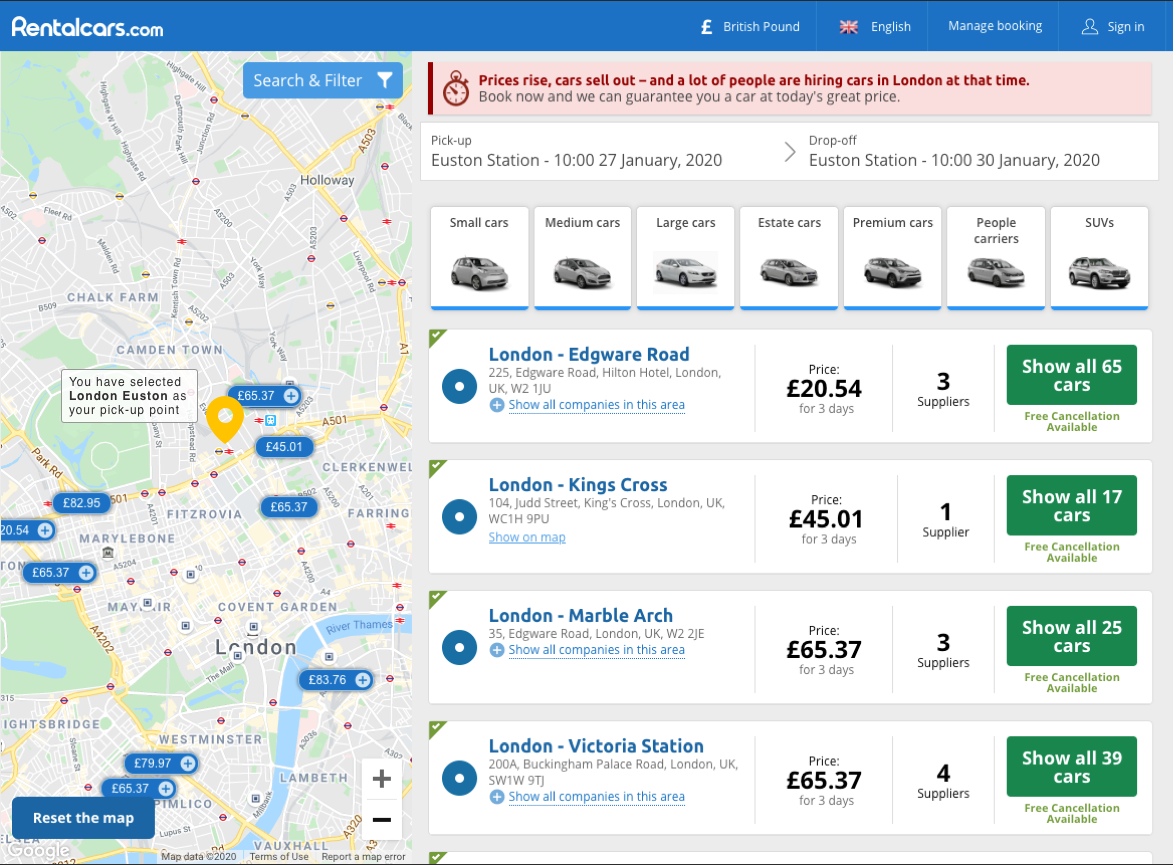 The main takeaway points from the user testing were:

The insights obtained from the user testing helped in selecting a design option. The blue border and tab in solution one made it appear as if the field was mandatory (it wasn’t) and we didn’t want users potential dropping out of the funnel at this critical stage, so decided to drop solution one and go with solution two.

The new search component was initially run in production as an A/B experiment where 50% of users performing the non-airport search got the original search component and the other 50% got the new secondary search field. We ran the experiment for four weeks and before we turned it on, measured the conversion rate of each user who went on to book a car and performed a non-airport location search. This was so we could compare and measure how successful the journey and UI performed against this benchmark figure.

When we turned the experiment on, we saw conversion rates jump by 8% over the four week experiment period, which exceeded the goal of 5%. We also saw incereased engagement and the number of interactions on product details page by users in this funnel increase by 12% which was useful for increasing cross selling product numbers.